Here's how to maintain, shape, or rejuvenate rhododendrons

I learned to prune rhododendrons by destroying my prized rock garden. I had a 30-foot-tall pine that I needed to cut down. It missed the house by a wide margin, but it didn’t miss the rock garden, which I had lovingly tended for years.

When the last of the pine tree was removed, I discovered that the damage was surprisingly slight, except for a beautiful Rhododendron ‘Roseum Elegans’, now a 2-foot mound of broken branches and torn foliage. Curious to see if the shrub would recover on its own, I trimmed it back a bit, cut back the scaffold of branches to as pleasing a shape as possible, and waited to see what would happen. Four years later, the rhododendron is one of the most eye-catching shrubs in the yard, with a beautiful shape, dense branches, and plentiful flowers. The incident illustrates how responsive rhododendrons can be to even severe pruning.

There are three common  reasons for pruning rhododendrons—maintenance, shaping, and rejuvenation—and the pruning method for each is easy to learn. The result is a shrub with dense branching, plentiful foliage, and abundant flowers. And you don’t have to drop a pine tree on your shrub border to learn how to do it.

Subscribe to Fine Gardening magazine to learn more about pruning. In fact, you’ll find instruction and inspiration for gardeners of every skill level. 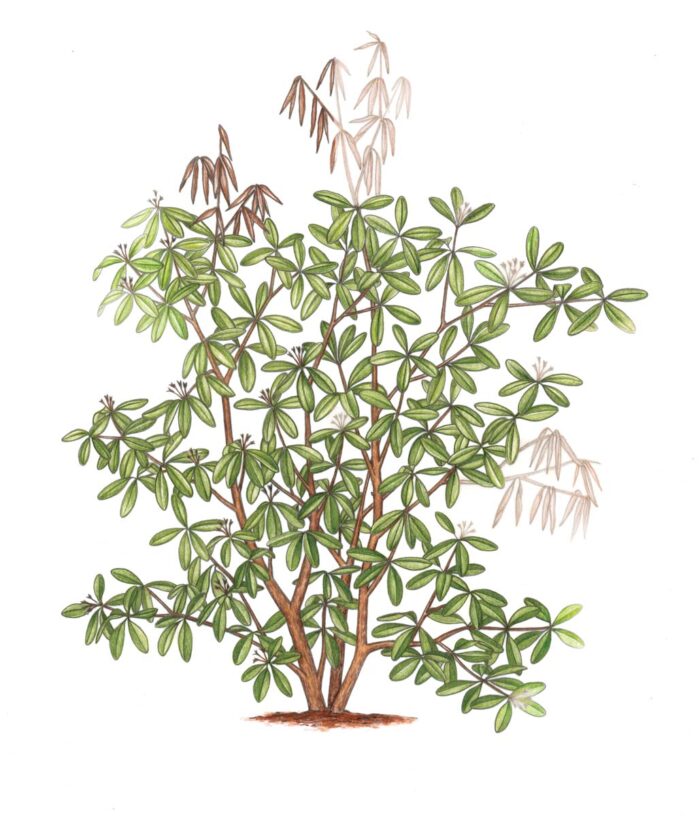 Snip at the base of the old flower trusses to keep the plant’s energy focused on producing growth rather than seed. Also remove dead or diseased parts of the shrub–follow the branch back to healthy wood and make a cut there.

Maintenance pruning consists of the removal of spent flower clusters, called trusses, and also of any dead or diseased wood. The trusses are not only unsightly but will eventually form seed, which uses precious energy that would otherwise be available to the plant for vegetative growth. Maintenance pruning is the easiest type of pruning and is the only one that needs to be done every year.

To remove old flower trusses on rhododendrons, use a pruning shear to snip the truss at its base, about 1/2 inch above the emerging flush of new growth. Some folks just grasp the stem with their thumb and forefinger and snap the truss from the plant. This works well most of the time, but occasionally the truss breaks off, taking some of the new growth with it. By using a pruning shear, such accidents are avoided.

Wood damaged by storms or a harsh winter should be clipped from the plant. Diseased stems, often identified by their wilted, curled yellow-green leaves, should also be removed. Make the cut below the damaged portion of the plant, taking care to cut into healthy wood right above a dormant bud. Be sure to disinfect the shears with rubbing alcohol between cuts.

Maintenance pruning is best done when the flowers have faded and before the flush of new growth rising beneath each truss is more than an inch or so tall. Many types of rhododendrons can benefit from maintenance pruning, including some deciduous azaleas, like the Knap Hill-Exbury hybrids, and most broad-leaved evergreens, such as the popular hybrids of mountain rosebay (R. catawbiense). Some varieties of rhododendron, most notably small-leaved cultivars like ‘Elite’, ‘Northern Starburst’, and ‘PJM Regal’, rarely set seed and do not require maintenance pruning. If your flowers and flower stalks simply shrivel up and essentially disappear in the weeks after flowering, then your variety doesn’t set seed and doesn’t need to be deadheaded.

Pruning for shape enhances the plant’s natural habit and form

Conversely, topiary and other more formal shaping techniques prune a plant into a shape it would not naturally assume. Shaping should not be done on leggy or very large plants, as their open habit requires a more drastic technique called rejuvenation pruning.As the name implies, shaping involves altering the shape of the plant, and it can be done for many reasons, from encouraging denser branching to controlling plant width or height. It differs from other shaping techniques, like topiary, in that shaping of rhododendrons is designed to develop the most aesthetically pleasing aspects of the plant’s natural habit and form.

Shaping improves the appearance of a plant by encouraging increased branching at its growing points. Since many evergreen rhododendrons hold their leaves for about three years, a branch will have a series of leaf whorls, each representing a year’s growth. The whorls of foliage are separated by sections of leafless stem, called internodes. In general, broad-leaved rhododendrons have much longer internodes than small-leaved and deciduous types and benefit most from shaping. To shape a rhododendron, follow the branch from the end down to the last whorl of leaves you want to keep. Make the cut about 1/4 inch above the topmost leaf in this cluster. Repeat as needed.

Shaping is most easily done in late winter, while the plant is dormant. Although this sacrifices some of the flower buds, it ensures a complete growing season for the new stems that emerge.

Rejuvenation pruning involves the careful cutting back of each primary branch of the plant’s framework. Rhododendrons often have three or more main branches rising from the crown of the plant. These branches, called primary branches, form the basic scaffold of each shrub. Each branch is cut at a different height to produce a staggered arrangement that will make the shrub look natural when the new shoots mature.Rejuvenation pruning is best used to restore shrubs that have become leggy, overgrown, or otherwise unattractive. Many rhododendron species and hybrids can be severely pruned and come back as good as new. Rejuvenation pruning removes most of the branches of the plant, initiating the rise of vigorous flushes of new growth from previously leafless old stems. The new growth matures into a new framework of branches that can then be shaped over the years to produce a stunning shrub. It’s best to perform this type of pruning in winter, while the plant is dormant.

Another type of rejuvenation pruning consists of cutting the entire plant to within 6 inches of the ground. It is a quick method, but not all rhododendrons survive the treatment. In some instances, an apparently healthy plant may be weakened by disease or poor nutrition and cannot recover from the stresses of hard pruning. To see if your shrub can handle such a hard pruning, cut only one of the main branches back to 6 inches. Cut the others back to a height you are sure is healthy, say 2 feet. If new growth emerges from the 6-inch cut, you can cut back the rest of the shrub following year and be confident in its return.

Regardless of the method, rejuvenation pruning works because of a special trait of rhododendrons. Look at the bark on a stem or main branch of many rhododendrons and you will see tiny buds, little pink dots about the size of a pinhead that pepper the surface of older branches. These little pink buds, called latent buds, are the key to successful rejuvenation pruning, as they will give rise to the new framework of branches.

Once you’ve determined how far back the plant needs to be pruned, take a moment and examine the area for a nice healthy bud (one that is firm and appears filled out) and cut 1/2 to 3/4 of an inch above that bud. Pruning above a cluster of two or three buds is better than pruning above just one bud, as this often produces multiple branches.

All three of these pruning methods are easy to do and result in a healthier and more attractive shrub. Don’t worry about making mistakes: Rhododendrons are very forgiving—even if you drop a tree on them.